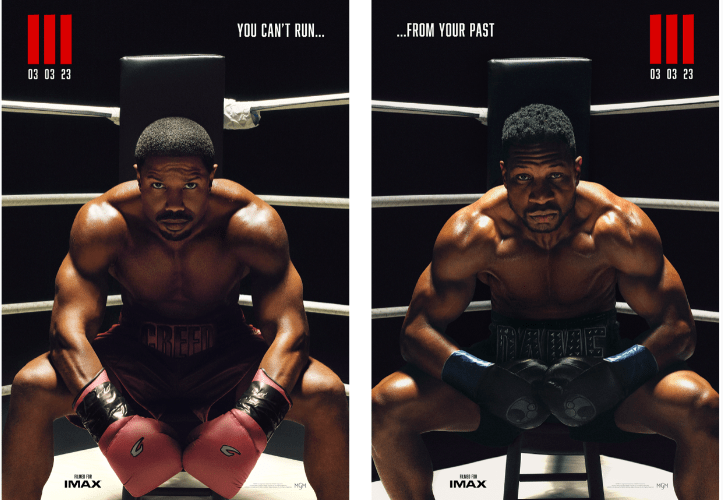 CREED III from MGM is set to premiere on 3/3/23 in theaters.

On Monday, October 17, 2022 during a Global Virtual Trailer Launch Event, Michael B.Jordan debuted the first look at the film, sharing three film posters featuring Adonis and Damien. During the conference Michael B. Jordan opened up and shared how he knew it was now the perfect time to not only starred in the film, but to also direct it. Notheless, keep reading because you are about to discover all the highlights and why Michael B. Jordan chose Mexican boxing prodigy Saúl “Canelo” Álvarez to debut as an actor in Hollywood.

CREED III, marks the directorial debut of Michael B. Jordan

Michael B. Jordan in Creed

In 2015, Michael B. Jordan first put on the gloves to play Adonis Creed. Then, in 2018, Michael reprised the role for CREED II. The Creed franchise has been a massive success. It has grossed in excess of $377 million at the worldwide box office, and the baton was officially passed from Rocky to Creed.

Seven years later, we’re here to celebrate the first trailer for the much anticipated CREED III, with Michael B. Jordan in the director’s chair for the very first time.

Michael B. Jordan, on why he chose to tell Adonis’s next story as his feature directorial debut, and why now?

“I think for me it was the perfect time. I think growing up on set, in the industry over 20 years – I started out doing background work and extra work and just kind of just seeing the sets evolve, seeing everybody’s job, seeing how a real production’s storytelling took place. I finally got to this place in my career where I wanted to tell a story and not just be in front of the camera, not just execute somebody else’s vision. And having a character that I’ve played twice before, it’s been seven, eight years living with this guy…

“So to be able to tell a story of where I believe Adonis is at, and also at 35 years old, I had a lot to say as a young man, as a young Black man, just my life experiences and how I could actually share that, share a piece of myself with the world – through these characters and through this story. So I just felt like it was the right time. I was talking to Ryan Coogler back when we were doing CREED I, and he was just like, It’s never the right time. You just gotta jump in the deep end and go for it. And he gave me a lot of encouragement. So I just felt like it was the right time for me”.

How challenging it was for Michael B. Jordan to direct himself while also acting?

“It’s one of those things where you know… I’m a little sick, I must have a problem, because it’s low-key torture, but at the same time it’s so much fun. And the challenge ,once you know the challenge of accomplishing it all, the multitasking nature of it to develop a story.

Trying to stay in shape, give all the departments what they individually need to go do their job and have my process as Adonis as well. It’s really hard to put into words. Every day was a struggle, but honestly, it was the team of people that I had around me. You really gotta surround yourself with the right help so you can focus on the things you need to focus on. Doing two things at one time, three things at one time – it’s just a part of the job.

I used to see Ryan, Steven Caple Jr. on these projects towards the end of production and going into post. And you would see ’em, they’d be a little run down, a little tired. I got a little more
pep in my step, a little more energy, clearly, cause I don’t have nearly the workload that they did, and I would empathize with them. Like, “nah, it’s okay, man. I get it, I get it.” I did not get anything. I had no idea. It’s only now I can really look at them, eye to eye and be like, “You know what? I get it. I understand.” And they’re like, “Yeah, you finally get it.” So it was an acknowledgment, you know, once you step behind the camera, the undertaking that that is, from the outside looking in, it seems, you know, tough. Yeah. But it’s extremely hard to do.

Saúl “Canelo” Álvarez acting debut and where did the idea of Canelo appearing in this film come from?

“We just looked back, it’s the history of boxing, and the Mexican culture is such a pillar within the sport of boxing and felt like there wasn’t really a lot of representation throughout the films in that type of way.And it just didn’t seem like the reality I lived in. So I wanted to incorporate Mexican culture into this film where we could, and you see Canelo in this project as well. And, you have Jose Benitez, who is a character, in this movie.

He plays Felix Chavez and it’s a character that I feel, it’s strong and it’s good. So anyway, to answer the question, I just felt that there was a lack there, that didn’t seem truthful and honest to the sport of boxing. And I wanted to kind of, you know, put that character there”.

The trailer highlights how quickly the reunion turns sour as Damian reveals how brutal his life of hardship has made him. “You think you mad? Try spending half your life in the cell watching somebody else lives your life. I’m coming for everything,” he threatens Adonis, as the footage shows how fiercely he handles his opponents in the ring.

After Bianca encourages Adonis to take Damian on in the ring, the trailer flashes through the usual training montages — which may remind fans of the similar training Adonis took in the last film and why this third round could be potentially fatal after that harsh beating — as the two former friends prepare to face one another in the ring.

“I need you to let go of your fear, let go of the guilt, let go of whatever was and walk into what is,” Tony “Little Duke” Evers (Wood Harris) tells Adonis as the clip ends. (Watch the trailer above)

From director Michael B. Jordan, CREED III is in theaters and IMAX 3/3/23

After dominating the boxing world, Adonis Creed (Michael B. Jordan) has been thriving in both his career and family life. When a childhood friend and former boxing prodigy, Damian (Jonathan Majors), resurfaces after serving a long sentence in prison, he is eager to prove that he deserves his shot in the ring. The face off between former friends is more than just a fight. To settle the score, Adonis must put his future on the line to battle Damian – a fighter who has nothing to lose.

Creed III is the third installment in the successful franchise and is Michael B. Jordan’s directorial debut.