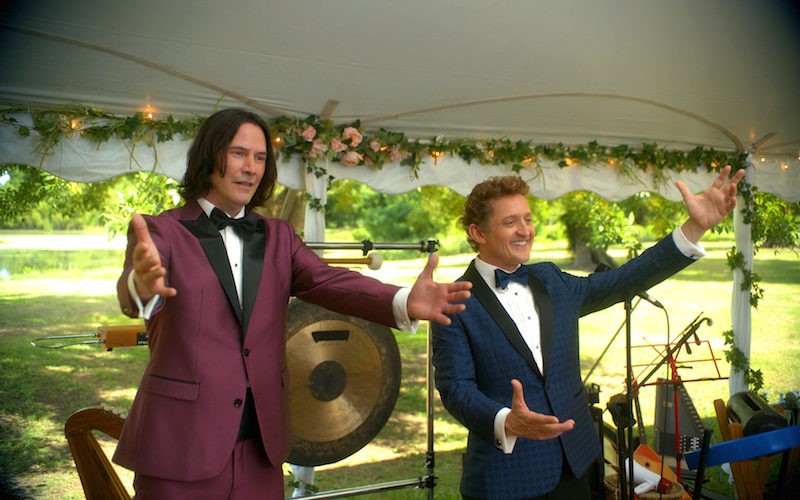 On August 16th, 2020 I was able to take part in a virtual press conference with Keanu Reeves and Alex Winter for Bill & Ted Face the Music. They answered some questions put forth by different outlets taking part in the press conference. 29 years after we last saw them, Keanu Reeves and Alex winter reunite in the new sequel in which Bill and Ted must create a song that will unite the world –Yet to fulfill their rock and roll destiny, the now middle aged best friends set out on a new adventure when a visitor from the future warns them that only their song can save life as we know it. Along the way, they will be helped by their daughters, a new batch of historical figures, and a few music legends.

“We were excited by the idea that we first heard from the writers,” says Alex Winter, who plays Bill, “and then we had to set about actually finding these guys again.” How did they do that? “Magic,” Winter jokes. Keanu Reeves, who plays Ted, chimes in: “Working on the script, and working with the director Dean Parisot, the writers, Chris Matheson and Ed Solomon were really collaborative with is. And Alex and I just internally kind of rehearsing with each other, and just got to that first day — and the first shot we had to get in the phone booth, and there we were. And here we go.”

Keanu Reeves: We really were reacting to the writers and their idea that our characters 30 years ago had this destiny and they didn’t fulfill it. So this idea of where are they now? It was like, who are these guys now? They’re offered another kind of chance, but that’s even more, in a Bill and Ted way, ridiculous, you know, and I thought that model felt like a worthwhile and funny idea.

On the fact that Face the Music will be one of the first pandemic-era films shown in theaters. I think an hour and a half of genuine, open-hearted, innocent whimsy may not be the worst thing for people.

Alex Winter: I think that the industry is rightly very concerned about the cinema experience, but also they’re very concerned about the the economics for exhibitors who, you know — keep the movie business alive and we want the exhibitors to stay afloat at the same time. We want people to be safe in a pandemic. And people need to be to be given an option to watch this movie safely at home. So we feel really good about the fact that the studio is willing to throw in behind that rollout plan. But we are also looking forward to a world in which the movie experience is back.

Keanu Reeves: I mean, I think everyone’s going to put all the protocols in place to make it as safe as possible for people who do feel comfortable. That opportunity presents itself if they want to go to the cinema. And it’s also on pay per view or streaming. So there’s that option as well.

On playing the iconic duo:

Alex Winter: I would say, for me, the whole experience has a kind of warmth to it. That’s always been the case playing these guys because they are joyful, optimistic people.

On Samara Weaving and Brigette Lundy-Paine:

Keanu Reeves: Brigette and Samara are just lovely people and very, very talented and brought a kind of enthusiasm and craft.

Alex Winter: It was really a whole different ball game when Brigette and Samara were cast and the amount of thought they put into playing them (Billie and Thea) wasn’t at all just watching our movies five times and then doing “us”, thankfully. They just created their own characters that were very much unique to them and their worldviews and all of that.

On working with George Carlin on the first two films:

Keanu Reeves: He brought class! He was just such a really, not humble, but just down-to-Earth… and worked really hard on Rufus. He brought a weight to it. Of course, it’s George Carlin coming from the future, you know? It was really extraordinary to have the chance to work with such an incredible person and artist.

Alex Winter: I have an overall fuzzy —and I mean warm and fuzzy, not indistinct fuzzy— memory and gratitude about having been able to work with George so closely.

Here’s a little featurette for BILL & TED FACE THE MUSIC, will be released on demand and in theaters on August 28, 2020

Dulce Osuna has over a decade of dedicated and extensive work experience in television, radio broadcasting and digital media. Whether behind or in front of the camera, Dulce has excelled as a producer, journalist, host, anchor, radio personality and YouTuber|Content Creator. She is a content creator on YouTube with around 300K and 300 Million Reproductions/Views and she is the co-founder and co-creator of Holahollywood.com, a bilingual entertainment digital magazine.

Dulce Osuna has over a decade of dedicated and extensive work experience in television, radio broadcasting and digital media. Whether behind or in front of the camera, Dulce has excelled as a producer, journalist, host, anchor, radio personality and YouTuber|Content Creator. She is a content creator on YouTube with around 300K and 300 Million Reproductions/Views and she is the co-founder and co-creator of Holahollywood.com, a bilingual entertainment digital magazine.

Enjoying #UniversalHolidays with family and friend

Check out the World Premiere of @Avatar The Way of

So many Fun revelations & emotional moments were s

#Creed3 #MichaelBJordan debuts as a director in #C

Moments From the #q&a after #barbarian screening t

@20thcenturystudioshorror I’m so excited to reco